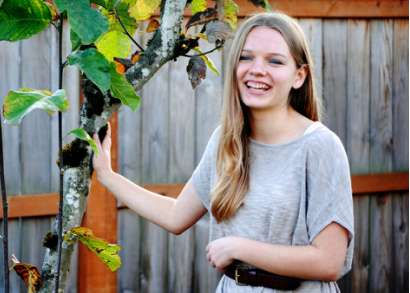 Amelia has grown up on the move, living in Minnesota, Montana, Seattle, and is now finally settled in Eugene, OR.  Her family is friends with Jessamyn’s. She had been looking for an acting opportunity when the cast opening for Margaret was announced. Within a month of the audition she watched the Emma Thompson Sense and Sensibility more than four times, and managed to coerce her three younger brothers into watching it too.

Along with acting, she enjoys reading, novel-writing, music, art and tree-climbing.  She is mortal enemies with spiders, her alarm clock, and anyone who tries to tickle her.  Amelia has always enjoyed theater and drama and is thrilled at the opportunity to act in this version of Sense and Sensibility.